Fog lights are widely known as those mysterious small yellow lamps tucked away at the front of cars and trucks. If you have no idea what a fog light is all together, start with our Complete Guide to Fog Lights.

Although not all vehicles come with fogs, we get more questions than you can ever imagine about them. Why are they yellow? What are fog lights for? When should I use them? Are white fog better than yellow fog lamps? Are they legal? Are they illegal?

As a result, we've put together this Ultimate Guide to Yellow Fog Lights where we go over everything you'll ever need to know about yellow and colored fogs.

What are Yellow Fogs?

Yellow fog lights are small lights found below the headlights and typically integrated into a vehicle's front bumper. 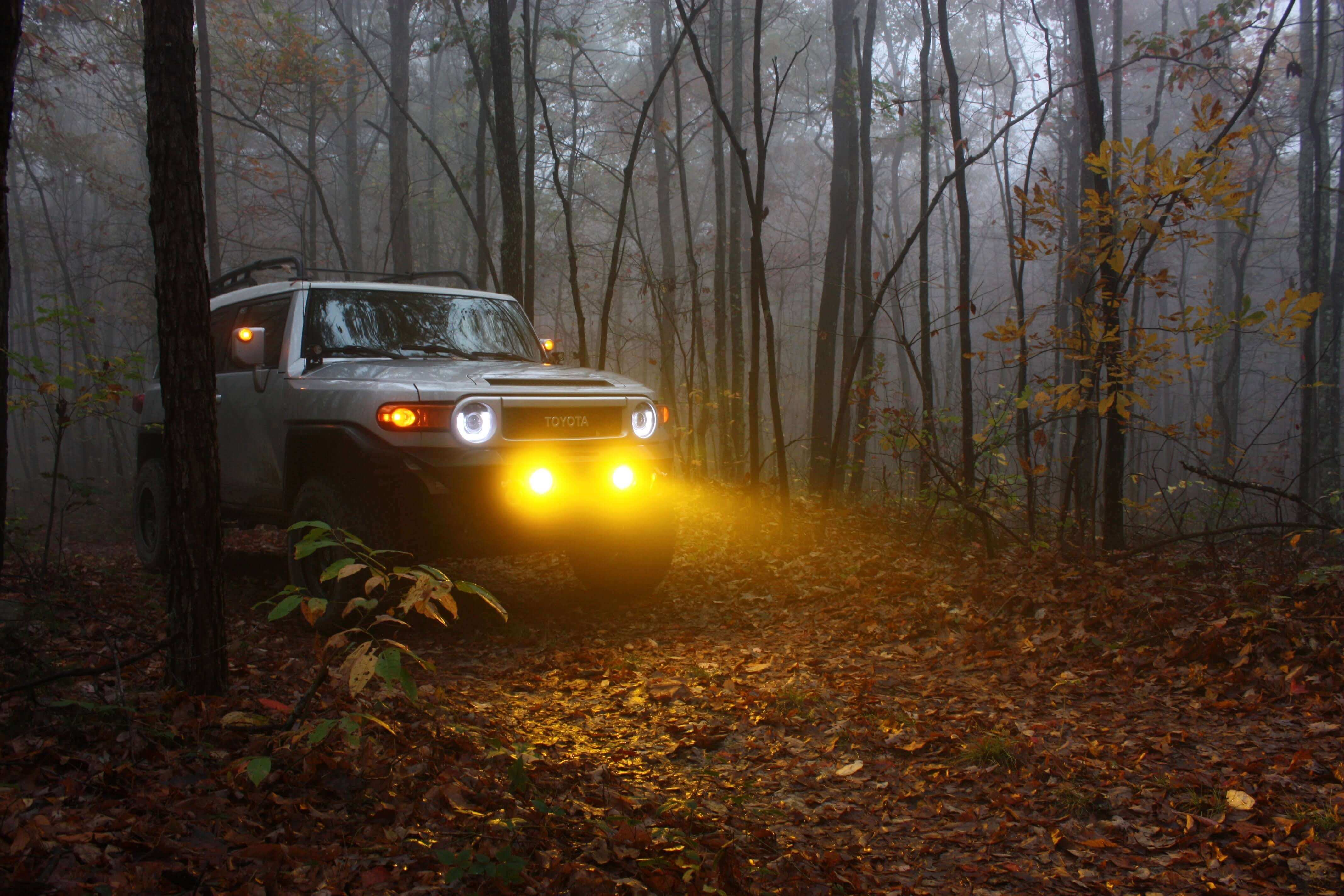 Why are Fog Lights Yellow?

There is a lot of misinformation on this topic so we're excited to finally put an end to this debate. While this subject can get very technical and scientific, we've kept it dead simple.

Fog lights are yellow because it's a soothing color our eyes and brains can process quickly, easily, and for an extended period of time. This is the real reason and it's based on neurology - the study of how our brains and nervous system work.

Humans process red light the easiest followed by yellow to green colors. Since red and green lights are used for other purposes on the road (such as traffic lights) we're left with yellow as the best runner-up.

Many other sources claim that fog lights are yellow because the color yellow is less reflective in foggy, rainy, and snowy weather. This is actually false and based on a wrongfully applied physics law known as Rayleigh Scattering.

While this law does say that colors with the longest wavelength (such as red and yellow) are less reflective, it is only true for a matter that is much smaller than raindrops and snowflakes.

What is the Purpose of Yellow Fog Lights?

The purpose of yellow fog lights is to improve visibility during poor weather conditions such as rain, snow, or fog.

As explained in the previous section, yellow is a color the human eyes respond well and quickly to, which helps improve visibility, and reaction times in adverse weather conditions.

Yellow fog lights come in three different types and technologies: halogen, LED, and Xenon HID. We go over each type briefly followed by a summary of the differences.

Yellow fog light bulbs most typically come from the factory in halogen, a type of bulb that creates light through filaments (think of a traditional light bulb design).

While this is a bit of an old technology at this point in time, it remains popular among vehicle manufacturers because they are cheap compared to LEDs and xenons. However, this comes with its limitations.

Yellow halogen fog light bulbs produce a relatively dim light of 3,000 lumens (at most), last up to 2,000 hours, and produce a light distance of about 10 ft, which is significantly less than their LED or xenon counterparts. They are also only available in yellow.

Luckily, you can now upgrade your yellow halogen fog lights to LED or xenon HID and select from a range of colors including white, blue and purple.

With the rise of LED technology came LED fog lights. These are the bulbs with the best brightness, longest lifespan, and light distance. Although some newer vehicles come equipped with them, the majority unfortunately still come with halogens.

Offering up to 10,000 lumens of brightness, lasting up to 45,000 hours, and producing a light distance of over 50 meters, it's obvious why these have become so popular amongst drivers.

While they are more pricey on a per-bulb basis, their long lifespan and brightness make them a great investment safety and money-wise. They are also available in white, blue and purple.

Although fog lights rarely come from the factory with xenon technology, they have become increasingly popular as well with the development of aftermarket xenon HID conversion kits.

HID bulbs produce up to 8,000 lumens of light, last up to 15,000 hours, and can throw the fog light beam as far as 40 meters, a major improvement over halogens.

Despite being more expensive than halogens, they are cheaper than LED and should be seriously considered when looking for a fog light upgrade.

BONUS: Which Yellow Fog Lights Should I Get?

Yellow LED fog light bulbs remain our top recommendation and are the favorite technology amongst motorists. However, if you have budget constraints, we strongly recommend yellow HID fog lights, which are a great runner-up option and also a major improvement over halogens.

Discover the differences between LED and HID headlights. 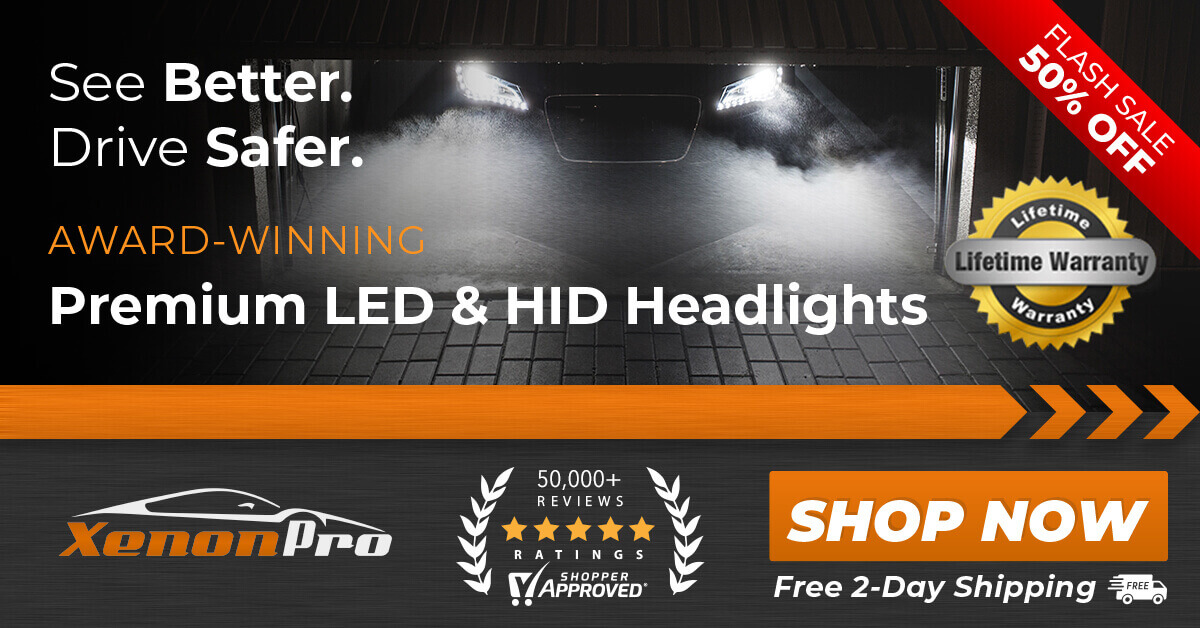 Yellow fog lights are better than blue and purple but are equally as good as white fog lights. The color that will work best for you will ultimately depend on your personal preference between white and yellow. We dive deeper in fog lights colors in the next section.

Fog lights traditionally came from the factory in yellow only but with the rise of LED headlights, came along white LED fog lights.

When looking at aftermarket bulbs, fog lights are not only available in yellow and white but also in blue and purple.

White light remains motorists' favorite color due to its ability to improve brightness and visibility.

With respect to fog lights specifically, white is just as good as yellow in terms of brightness, visibility, and the human's ability to respond well and quickly to the road.

White fog lights are gaining traction as a result of the rise in popularity of LED and xenon bulb conversion kits as well as the rapid increase of car manufacturers using LEDs on their newer vehicles.

Amber fog lights are essentially a darker shade of yellow that some may consider orange. While they are better than blue and purple, they are inferior to yellow and white as our eyes respond slower to the amber color.

Although the response time is marginally lower, a split second can be the difference between safety and harm when driving in difficult conditions.

Blue fog lights are cool but they are unfortunately not very helpful. While blue fog lights are better than no fog lights, blue is one of the least bright colors and is known to create a blurred vision effect. It is also a color the human eye is slow to respond to.

If improved visibility and safety are your objectives, we recommend white or yellow fog lights.

Just like blue fog, purple light is not very bright and is one of the worst colors in terms of response time. So again, if improved visibility and safety are your objectives, we recommend white or yellow fog lamps.

Are yellow fog lights better than white fog lights? This is a question we get all the time and one for which the answer depends on the driver.

Although both colors are objectively equal, drivers have reported that yellow is more soothing but that white appears more bright. Motorists have also reported that white creates more glare than yellow.

Yellow and white are both the recommended colors as previously discussed. They are the brightest and our eyes respond to them well and quickly. So, which color is better will actually depend on your personal preferences.

Although amber lights are a lot less in demand, we still get questioned on whether they are better than yellow fog lamps. Looking at the science, our eyes respond slower to amber and it produces a darker, less bright color compared to yellow.

While amber fog lights are better than no fog lights, it's a good runner-up option after white and yellow.

This section is for informational purposes only and should not be interpreted as legal advice. Please contact your local, state, or federal regulators for official information or contact a legal professional.

Yellow fog lights are perfectly legal everywhere in North America. If they weren't you would not see companies like Ford and Toyota shipping cars with them.

White and yellow fog lights are legal throughout North America. Colored fog lights are regulated on a state level (DMV) so what is legal or not depends on where you're driving.

In California and Virginia, for example, only white to yellow shades of fog lights are permitted.

Can you have Colored Fog Lights?

Fog light colors are regulated by individual states. All states permit white and yellow fog lights and most allow for amber. Other colors such as blue, green, red, and purple may not be permitted.

Blue fog lights may be illegal in certain states. Please check with your state's Department of Motor Vehicles (DMV).

Is it illegal to drive with fog lights on?

Can I make my yellow fog lights white?

Yes, you can change your fog light bulbs to white LED bulbs or xenon HID bulbs. To get started, visit our Vehicle Finder Tool.