LED vs Xenon HID Headlights - Which Are Better?

TL;DR: The main differences between LED and HID is that LED lights are brighter, have a longer lifespan , don't fade over time, have no warmup time, and are more energy efficient compared to HIDs. Lastly, LEDs create light using electricity (diodes) while HID uses gas.

💰 Price: Prices vary for both products but HIDs are always less expensive.

🍭 Colors: LED come in every color but HIDs are limited to shades of yellow, white, blue, and purple.

✨ Fade: LEDs do not fade over time but HIDs do.

LEDs and HIDs are the new go-to technologies for newer vehicles, luxury vehicles, and those looking to upgrade and convert from their dull stock halogens to brighter bulbs.

As one of the oldest sellers of HID and LED headlamps and fog lights, the most common questions we get from customers is What is the difference between LED headlights and HID headlights?

This famous debate has taken the car community by storm ever since LED conversion kits were introduced to the market to challenge the incumbent, HID.

While it may seem at first glance that LED headlights are far superior to HID lights, it is not exactly the case, especially when looking at headlight conversion kits. The devil is in the details.

HID conversion kits, for instance, produce far more light compared to LEDs inside projector headlamps even though LEDs produce more light if taken out of the headlight.

In this guide, we dive deep into and analyze the differences between LED headlights and HID (Xenon) headlight bulbs so you can choose the best option for your needs and that of your car, truck, motorcycle, ATV, or snowmobile.

For most drivers like you, the million-dollar question is which is better, LED or HID headlight bulbs, and which is brighter?

The answer is it depends on your vehicle. Both LEDs and HIDs are great technologies and a big upgrade over halogens - especially with regards to brightness and durability but their individual performance will depend on the type of headlight found in your car.

Although the science behind this is quite complex, the important thing to remember is that you get the appropriate technology for your type of headlight for the best results. This topic is covered in great detail in our guide about Projector vs Reflector Headlights.

Many vehicles have projector-reflector hybrid headlight assemblies, for which mixing and matching the two technologies will yield the highest total light output.

Analyzing the Differences Between LED and HID Headlights

The core difference between LED bulbs and Xenon HID bulbs is the technology used to produce the light the bulbs emit. This core difference leads to many technical differences, which ultimately impact factors that are important to drivers such as brightness, durability, and energy efficiency. We discuss the major factors below.

Without getting too technical, LED bulbs produce light through a chip that glows when powered with electricity while Xenon HIDs create light by heating a gas (xenon) that creates light. We explore how LEDs and HIDs work in greater detail in the next sections.

Another key difference between the two types of headlight bulbs is their design.

An LED bulb is typically composed of a heat sink or fan at the base, the locking tabs in the middle, and a long narrow stem at the top, where you'll find the diodes as shown below.

LEDs have a simple design compared to HIDs and halogens but are typically longer and wider than the latter because of the heat sink or fan.

HIDs on the other hand, have a similar design to halogens. An HID bulb has an inner quartz chamber with electrodes (this is where the magic happens) and locking tabs at the base.

Unlike LEDs, however, HIDs need a ballast and an ignitor to function, which is a separate component that connects to the bulb.

When compared to halogen bulbs, LEDs and HIDs are in a completely different league when it comes to durability.

LEDs, due to their design, are the longest-lasting automotive headlight and fog light bulbs on the market with a lifespan of up to 45,000 hours. LEDs will stop working when the power stops flowing to the diodes, which can be caused by old age, corrosion, heat, damage, etc.

HIDs are very durable as well but due to their technological design, the xenon gas that creates the light will run out at some point. HIDs can last up to 15,000 hours, which is still exponentially longer than halogen bulbs. Unlike LEDs, however, HIDs won’t abruptly stop working but rather slowly fade away and get progressively dimmer as the xenon gas runs out. 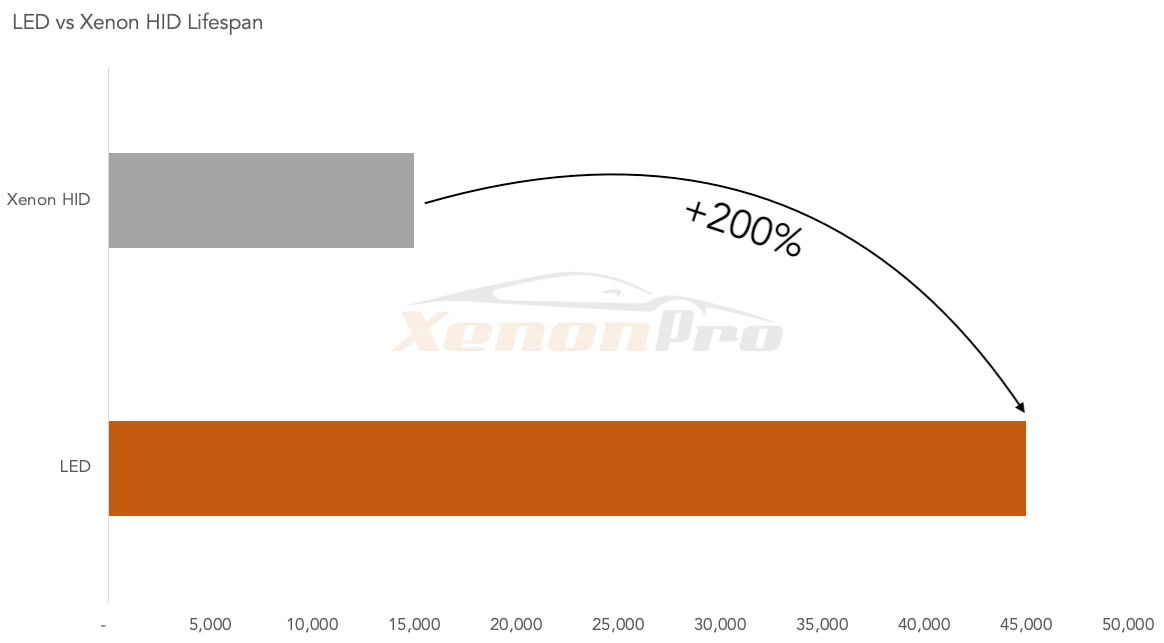 Another difference between these two automotive lighting technologies is the amount of heat they create.

Many drivers that live in cold and snowy regions prefer HIDs for this specific reason as it helps to melt the snow off the headlights.

One last key difference between these two automotive lighting technologies is energy efficiency. Efficiency in the context of light is measured by how much power is turned into light versus heat.

As you can already guess, LEDs are more energy-efficient than HIDs as a result of their design. LEDs are able to convert up to 90% of their energy into light compared to HIDs which can convert around 70-80%. Both are huge improvements over halogens, which only convert 20% of the energy into light.

What this means for your vehicle is that it can create up to 5 times the amount of light produced by halogens using the same power draw. That's like getting a 500% raise at work for doing the same job. 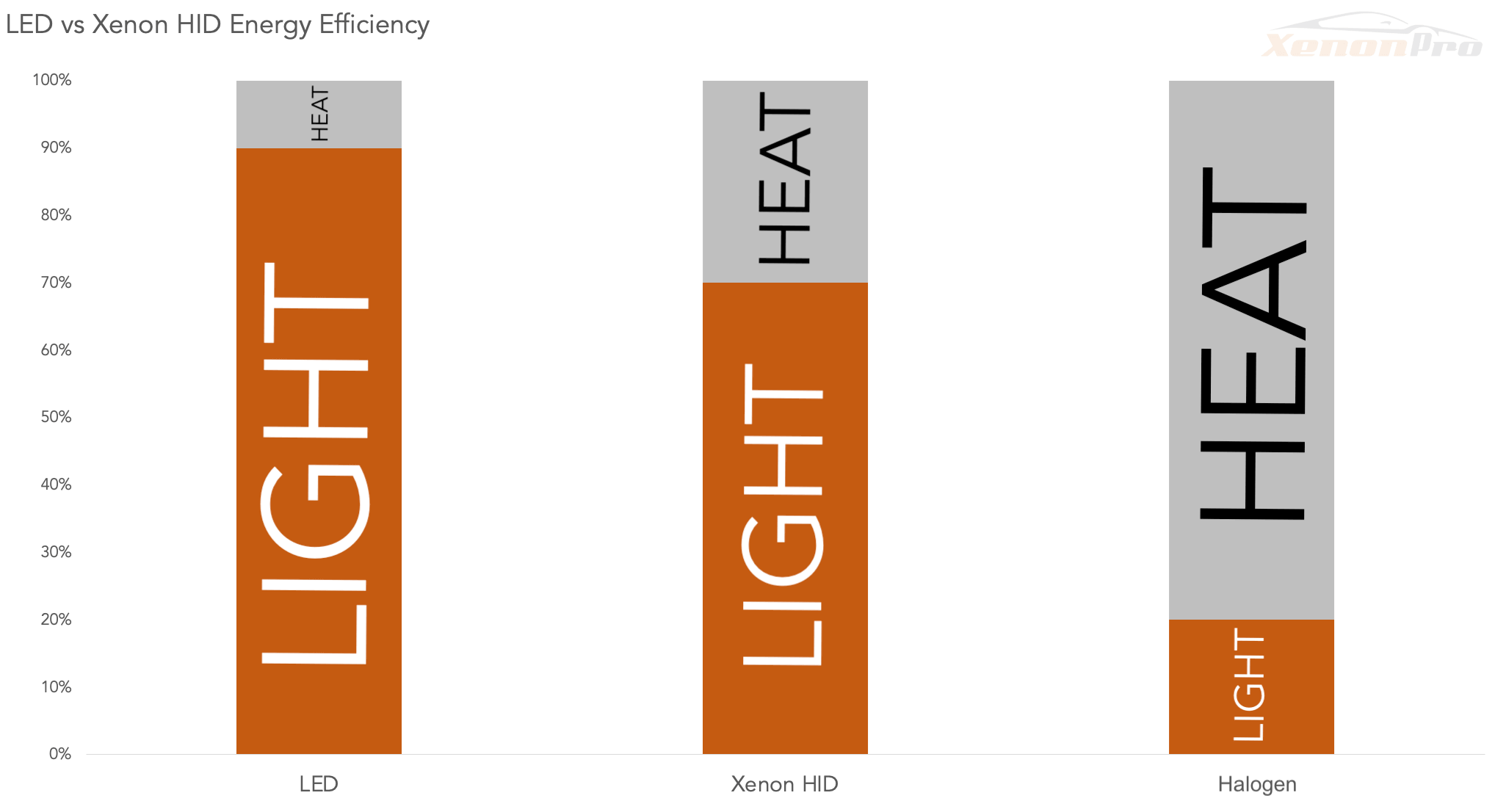 Unlike headlights which are designed to help us see in normal weather conditions, fog lamps exist to help improve visibility in foggy weather, heavy rain, and heavy snow.

It's been proven scientifically that to achieve this goal, the best light color is yellow or amber. This is the exact opposite of headlights, which achieve their goal of maximum visibility through a bright white light.

Since fog, snow, and the reflection from rain are white (white-ish), going with bright white light would actually reduce visibility as a result of the increased glare.

However, it can be difficult to find yellow LEDs whereas HIDs commonly come in a yellow/amber color known as the 3000K temperature. You can learn more about HID colors here.

The way LEDs produce light can literally be found directly in the name: LED = Light-Emitting Diodes. Diodes, also known as chips or semiconductors, are the little yellow things you see on LED bulbs. Light-emitting diodes are also commonly used in TVs, street lights, light strips, and many other applications from tiny to huge. For more information, visit our guide on How LED Headlight Bulbs Work.

Upgrading Your Headlights to LEDs

At XenonPro, we manufacture premium-grade, Plug & Play halogen to LED headlight bulb conversion kits, which means you can say goodbye to your dull and yellow halogens and finally get the bright headlights you deserve.

The process of upgrading your headlights is just as easy as replacing your halogen bulbs. With all the benefits of LED headlights available at low cost, the ease of installation even for the non-technical driver, an LED conversion kit is an essential investment in the long-term future of your vehicle and driving.

Not only will you benefit from better road lighting conditions and increased visibility in all weather conditions, but you will also save on ongoing maintenance costs by upgrading. Read more on how you can upgrade your headlights to LED.

Who Should Use LEDs

LED headlight bulbs are ideal for daily drivers looking to improve their nighttime driving experience for cars with reflector-style headlights.

If you want no hassle, increased efficiency, and strong headlights for your vehicle, you should have no hesitation in opting for LEDs.

Now the headlight of choice for top-end and luxury vehicles, motorists worldwide are now waking up to the advantages of LED headlights. LEDs can cost more in the first instance than HIDs or halogens, but over time this pays for itself in lower maintenance cost, greater safety, and more peace of mind.

Passing an electrical charge through the xenon gas in a vacuum-sealed quartz bulb creates substantially more light than the glowing filament design of halogen bulbs. HIDs are found primarily in high-end vehicles and other industrial applications.

For more information, visit our guide on How HID Headlight Bulbs Work.

Upgrading Your Headlights to Xenon HIDs

At XenonPro, we manufacture high-end, Plug & Play halogen to HID headlight bulb conversion kits, which are a great and significantly brighter alternative to stock halogen headlights.

Like LEDs, the process of upgrading your headlights is just as easy as replacing your halogen bulbs but requires some very simple assembly.

With all the benefits of HID Kits available at low cost and the simple installation, the bulbs are a great investment for the immediate and long-term benefit from brighter lights to cost-saving. Read more on how you can upgrade your headlights to HID.

Who Should use Xenon HIDs

HID headlight bulbs are ideal for daily drivers looking to upgrade to brighter bulbs in vehicles with projector-style headlights. HIDs are also more budget-friendly compared to LEDs and offer a greater range of colors, from yellow to white to blue and purple. 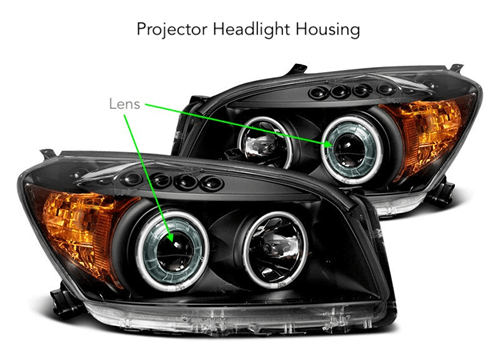 Which is better LED or HID headlights?

Are HID headlights brighter than LED?

HIDs are brighter than LEDs in projector-style headlight assemblies.

Are LED headlights brighter than HID?

LEDs are brighter than HIDs in reflector-style headlight assemblies.

Which is more expensive LED or HID headlights?

Are LEDs more expensive than HIDs?

Are HIDs more expensive than LEDs?

No, HIDs are cheaper than LEDs.

How bright are LED headlights?

LED headlights can produce up to 9,000 lumens of total light output.

How bright are HID headlights?

HID headlights can produce up to 8,000 lumens of total light output.

Can I replace my HID headlights with LED?

Yes, but it is not recommended unless you change your entire headlight assembly. HID bulbs are almost always in projector-style headlights for which LEDs do not perform well and can be very dim.

Can I replace my LED headlights with HID?

No. LED headlights cannot be replaced with HID bulbs unless you change your entire headlight assembly. Stock LED lighting is typically integrated within the assembly and cannot be removed individually.