When shopping for a jump starter, you will likely come across a variety of terms referencing the power of the device such as Peak Amps, Cranking Amps and Cold Cranking Amps.

Although these terms may seem confusing at first, they are very simple to understand but mighty important when deciding which portable car battery booster to buy.

In fact, knowing these terms is important for having a better understanding of batteries for any vehicle, whether it be a car, truck, boat, jet ski, lawnmower or snowmobile.

Generally speaking, portable jump starters with a higher Peak, Cranking and Cold Cranking Amp rating will perform better in all climates, work on a greater range of vehicles (small and large, very old and new), and will have a better chance of boosting completely discharged batteries.

Peak amps (current) is the maximum amount of power (electrical current) a jump starter can discharge initially, normally for a very short period of time.

When a power supply such as a jump starter is initially turned on, current rushes into the load, such as a car battery, going from zero and rising rapidly to reach the maximum power, known as the peak amp or peak current. 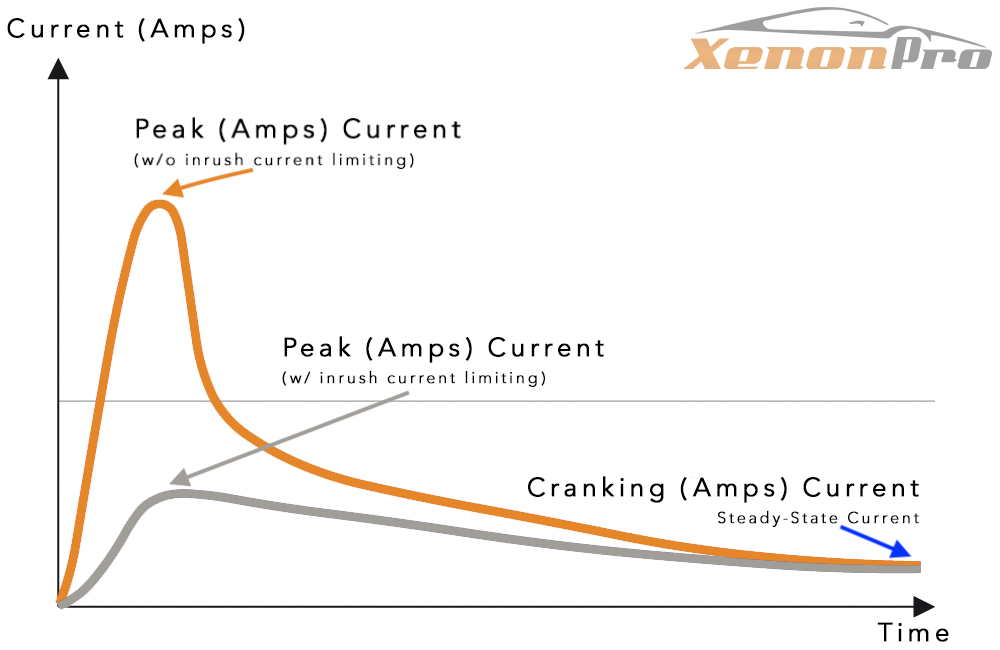 The peak current then normalizes to the stable current, which is also known as the cranking current or cranking amps (CA) as we explain in greater detail in the next section.

If your car battery requires less than the peak current supplied by the jump starter, it will automatically discharge the maximum amount, preventing any harm to your car battery. This is called inrush current limiting and can be visualized using the chart above.

Generally speaking, a jump starter with a higher peak amp rating is more powerful than one with a lower peak amp rating. Peak amps typically ranger from 300 to 1000 amps with some very powerful ones exceptionally reaching over 3000 amp.

Cranking amps (current), also known as 'CA', starting amps or starting current, is the amount of power (electrical current) a battery can discharge and sustain for at least 30 seconds during normal climate conditions of 32 degrees Fahrenheit or 0 degrees Celcius.

Cranking amps is, therefore, the amount of power you will need to start your vehicle's engine in a 'normal' temperature setting, essentially not during cold weather such as the winter.

The cranking amps required during cold weather conditions is called Cold Cranking Amps (CCA), which we cover in the next section.

Cold cranking amps (current) is the amount of power that can be discharged and sustained for 30 seconds at a temperature at or below 0 degrees Fahrenheit or -18 degrees Celcius without dropping below 7.2 volts for a 12v battery. 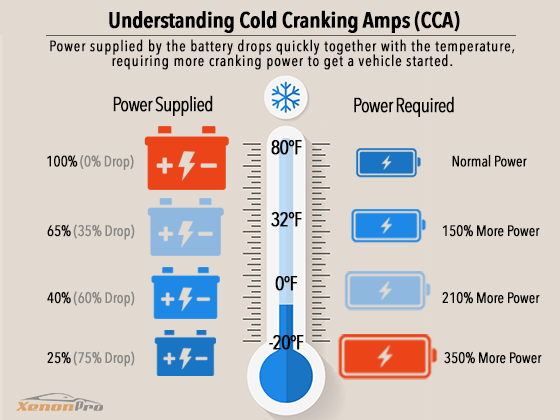 Cold cranking amps is, therefore, the amount of power you will need to start your vehicle's engine in cold temperature setting, essentially during cold weather such as the winter.

We differentiate Cranking and Cold Cranking Amps because batteries do not perform equally in all temperatures. In fact, batteries need to work much harder during cold weather, which explains why dead car battery problems are much more common in winter than during the summer.

During low temperatures, batteries not only require more power but also discharge a lot quicker. You'll notice that your cellphone battery, for example, dies a lot quicker when exposed to cold weather.

How many amps do I need to jump start my car?

400 to 600 amps will be more than enough to jump-start any normal, consumer vehicle. Commercial vehicles may require up to 1500 or 2000 amps. Compact and small vehicles can be boosted with as little as 150 amps.

The outside temperature, age of vehicle and depth of discharge (how dead the battery is) all impact how much power (amps) you will need. Colder weather, older vehicles and heavily discharge/completely dead batteries will require more power.

How many Cold Cranking Amps (CCA) do I need for my car?

400 to 500 CCA will typically jump start any vehicle, including large pickup trucks and SUVs. A small car battery can be boosted with as little as 150 CCA while large SUVs and trucks will require 400 to 500 CCA.

It is important to note that the age of the vehicle also plays an important role in the amount of CCA required. Older cars will require more power than newer cars.

Do I need a jump starter with same CCA rating as my car battery?

No. Jump starters will automatically limit and discharge the appropriate amount of power based on your batteries capacity.

What is a good CCA for a battery?

A good CCA rating for a battery is between 400 and 500 cold cranking amps. This amount of power will be sufficient to boost small and large consumer vehicles even during harsh winter conditions.

More CCA means more power, especially during winter. Since most jump starters are designed with technology that prevents transmitting too much power, a higher CCA rating is better.

A higher CCA rating means your jump starter will work better in the winter, be able to boost large cars, older cars, and batteries that are completely discharged.